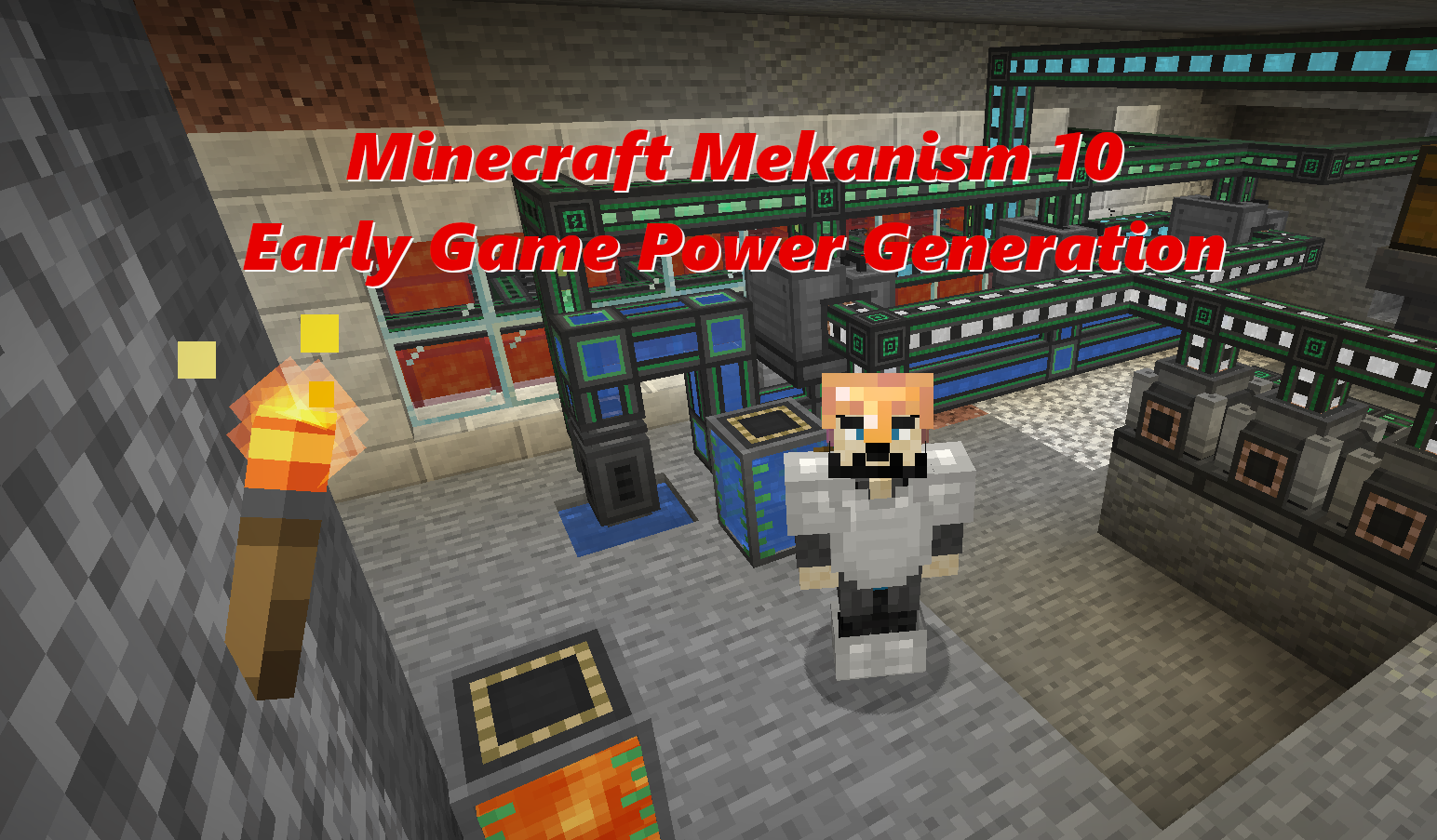 The purpose of this introductory guide is to lay down a foundation of knowledge which I feel like most people jump in without. From here you can search for some of these power generators, see how to make them and start connecting them together. I’ll be providing more in-depth guides on each in upcoming content.

Generating power with Mekanism includes a vast set of methods, which you will progress through quickly as you start going through the technical and ore processing facets of the mod.

The more machines you set up, the more you need to power them. You’ll add a machine to the mix and everything will grind to a stop and you’ll be on the hunt for more power. So be ready.

From the start, you will need to process ores that you can’t get by mining, like steel. And the ores that you can mine, you’ll want to double, and later triple (and more) through machines. But be careful about heading too fast toward that without the power to back it up.

Your first power will come from some inexpensive machines, which is likely the heat generator. I’d recommend you don’t fly too fast by this step. Learn about them and keep them around as later on it takes power to make power and it’s nice to have some of these smaller power supplies kicking around.

Before you get too far, while you can generally connect power generating devices directly to machines, you’re going to want to get some basic universal cables. They’re  easy to make and will share power between multiple devices. They also act as a battery and the more you have connected, the more power they’ll store to help smooth out power spikes. They don’t hold much though and while you can’t count on them to keep machines running, they’re a good way to tell if you’re running on a surplus or deficit just by looking at them.

You can see in the image above that the run of cables that are under my crosshairs has about 600 kFE capacity and it’s currently empty. That’s because those electrolytic separators are always running and dumping excess hydrogen and oxygen from an endless supply of water, otherwise keeping all the tanks full.

The heat generator creates power quickly by putting some fuel into it which is converted into lava, or you can submerge it in lava to take the ambient heat and turn it into power.

It will only create about 30 FE per tick of power, which won’t do much, but it will power your initial machines. You might do well to create a few of these, which you won’t regret as you start to drive a few machines to get going with ore doubling.

You only get about 30 FE/t from a heat generator surrounded on all sides with lava. You can get more power out of these by putting a fuel source in it, like a bucket of lava, but that defeats the purpose of passive infinite power. Move on to other sources before you start feeding these guys fuel that’s limited in supply and cannot be generated automatically.

Solar generators are powerful early-game power sources, but they have one big drawback. They only work when the sun is out. If you’re too reliant on solar power, you’re going to be doing a lot of running for your bed. Which is fine when you’re focused on building your power grid and machines, but later in the game, you’ll not want to have to worry about sleeping. If everything grinds to a halt within minutes of the sun going down, it’s time to move on to something bigger!

The basic solar generator can produce a maximum of 50 joules/tick, but be careful with that because in many biomes you can get only a fraction of that. Here in my plains biome, I’m only getting about 18 FE/t.

If you are going for solar power, you can get more bang for your buck with the advanced solar generator, which for the cost of three of these, you can get that which produces 4x the power.

Maximum output is 300 joules/tick, though this requires an extreme environment. The most I’ve seen is about 106 FE/t in a plains biome. The wiki indicates that hot environments like a desert will produce more, however I’m currently getting about 76 FE/t in my world in a desert.

These are a bit costly, so be sure to test the output of a solar generator before making a bunch of these.

Wind generators will produce decent power, and more of it with higher altitudes. Most importantly, they work in the dark!

My wind generator here is producing 64 FE/t at Y level 74. You could spend a lot on basic universal cables to get it up very high, and depending on how well your solar generators do where you live, this may be more or less cost-effective.

After moving it up to Y level 94 it generates 77 FE/t, which is now getting up into Advanced Solar Generator levels. But man it’s ugly!

You have to go pretty high up to max these out (like the build max height). Maybe later in the game when you can transport power with a quantum entangloporter from the top of a mountain these will make some great additions. OK, I’ll maybe need to try that.

My suggestion is to build a good base with heat generators, some wind power, and maybe some solar generators to top it off and give you extra capacity for heavy machine usage. If you’re powering mission critical systems like Refined Storage, you won’t want to run out of power and all these run for free with zero effort after they’re set up.

When your machines are consistently hitting bottom, stuttering and waiting for the next drip power, it’s time to upgrade to heavier-duty power.

What about batteries and capacitors?

Mekanism has energy storage units that can hold a lot of power later in the game. The basic energy cube only holds 1.60MFE, which may seem like a lot, but it’ll probably take a lot of these all filled up to get you through the night. And on an over-taxed power grid, these tend to be emptied out when several machines are fighting for juice.

I do like to put one of these on the network to see if I can get it to fill up, which means I’m managing power well. And later on they’re useful when you want to take some power on the road with you, like when you have a digital miner.

The grid itself acts as a big battery, the more segments that are in it, the more power it will hold. Play that game with yourself to see if you can keep it on the edge of being powered vs running at zero. When it’s at zero, your machines are struggling and not working as fast as they can.

That’s the summary of early game Mekanism power generation. External Heaters, Wind, and Solar all form a foundation for a good power system in minecraft.

Now that we’re established, let’s work on some more advanced power in the next part of the series.

Support me. Thank you!

… is how I start all of my YouTube videos. I love helping people, teaching, and sharing my love for modded MineCraft.

I’d love to have you along. Please subscribe to my YouTube channel, join my discord, just connect with me!